Translations may not be perfect. 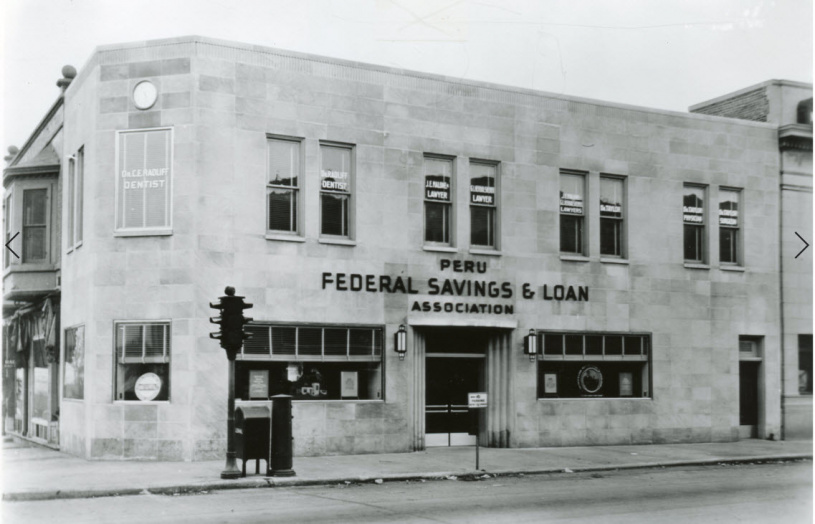 Peru Federal Savings Bank has been serving the financial needs of those residing in the Illinois Valley since 1887. First founded as the Workmen’s Loan Association of Peru on October 8, 1887, the association elected its first Board of Directors on October 31, 1887. The first board members were:

The Bank was established as an association of persons to raise funds to be loaned only among the members of such association. This form of ownership is known as a mutual institution. The term Mutuality stems from the world of 1800’s America, a period in history when philanthropic individuals set about to improve the quality of life for the citizens of a rapidly changing country. The need to set a portion of one’s savings aside for future use was a need not met by larger banks, and it was for this need that Mutual Savings Banks were formed. Due to this emphasis on providing a service not previously met, Mutual Savings Banks played an important role in communities throughout the United States. The original intent was not to earn a profit for the founders of the bank. Instead, the earnings would go to or benefit the depositors. Profit not directly paid to depositors in interest benefits the depositors by being held in reserve as retained earnings. This reserve ensures that even in adverse situations for the bank, the depositors’ principal can be paid on request. It is upon these principles that today’s Mutual Savings Banks operate. The Workmen’s Loan Association of Peru continued in operation until September 18, 1935 at which time it began the process of converting the association to Peru Federal Savings and Loan Association. On December 12, 1935 the Peru Federal Savings and Loan Association received its charter and began operations. The first board of Peru Federal Savings and Loan Association consisted of:

From time to time, we provide links to other websites for the use of our visitors, which have been compiled from internal and external sources. By clicking “Continue” below, you will be opening a new browser window and leaving our website. Although we have reviewed the website prior to creating the link, we are not responsible for the content of the sites.

Information on linked website pages may become dated or change without notice, and we do not represent or warrant that information contained on these linked pages are complete or accurate. We suggest that you always verify information obtained from linked websites before you act upon such information.

The privacy policy of this bank does not apply to the website you visit. We suggest that you always verify information obtained from linked websites before you act upon such information.

E-mail is not necessarily secure against interception. If your communication is very sensitive, or includes personal information such as your account numbers, credit card number or social security number, you may want to call us, send it through the U.S. Post Office, or use our Secure Contact Us Form.